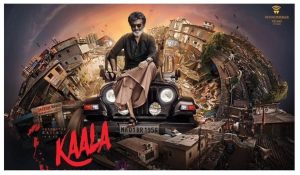 Once upon  time lived a person who defined & defied style, his charisma and just the mere appearance made the fans go crazy, whistling, dancing and if it were a first day first show then all you would hear is the loud chant of his name “THALAIVA!!!” – this is a miniscule of the gist on how he would be spoken about after centuries. Truly a Living Legend!

The Whole world knows about his many achievements, fan following and Persona. I heard a story of a fan who requested the hotel manager that he would just hide behind the door and take a peek at RajniKanth, I am sure this one of the many such exiting stories of his fans.

Over the years he has been identified with many names – Basha, Muthu, Annamalai, very recently KABALI and now KAALA!!! He is known for doing common man roles with his own style.

KAALA is Directed & Written by Pa.Ranjith who also wrote and directed the very recent movie based on a Don’s life – KABALI (Romance/Action/Drama), it is produced by Dhanush. We would also see the likes of Nana Patekar & Huma Qureshi the stars from bollywood. Samuthirakani who has become a renowned actor in recent years is also a part of this movie, his fans would be eager to see what role he is playing and how it plays out. If we see his track record rest assured that he would be in a pivotal role.

The Great Rock – Fire Song which completely justifies Rajnikanth Nerupu Da, for which the music was given by Santhosh Narayanan is also the Music Director for this movie – I would say some rocking and bass beating songs are up for grabs.

This time he is in an Avatar of a Mumbai ka DON – “Bhai” in a more colloquial manner. The Teasers are of the charts, fans are absorbed & amazed by his deliverance yet again. The Dialouge “Kya re, Setting ah!!” sends chills down the spine and Goosebumps all over, PUNCH Dialogue!

I am certain the movie will take us through a journey of Emotions and make us high and floating on the clouds for days to come, as it is the Kabali fever has not settled and now get recharged with KAALA.

Originally this movie was set to release on April 27th 2018, however the strike in the Tamil film industry postponed the same. This is actually a blessing in disguise as the new release date of 7th June 2018 is super favorable and promises success for the film. The movie releases when the Moon will be in Purva Bhadra star ruled by the planet Jupiter. This constellation ensures victory and success in all endeavors and release of this film is no different. On the negative side the film makers may have to face more controversies and legal troubles. Overall, the movie will be widely recognized, appreciated by viewers and is likely to be a mega box office hit.