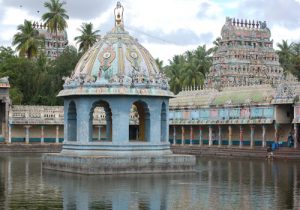 This temple is dedicated to the planet Mars and is situated in the famous village- Vaideeswaran Koil in Tamil Nadu. Here Lord Shiva is worshipped in the form of a physician – God of Healing who can cure diseases. This is the place with gave origin to Palm Leaf Astrology called Nadi Astrology in tamil; this ancient form of astrology is still prevalent in most of the houses of this village 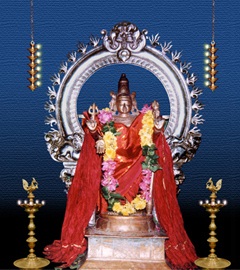 When Lord Shiva was once separated from Devi Uma, he sat under a tree and went into deep mediation. A drop of sweat from   his third eye fell on the earth; the drop of sweat took the form of Angara. The planet Mars is hence considered as brother of Lord Muruga. His consorts are Devi Malini and Devi Sushilini.

There is a holy pond in the temple where devotees take a dip and then offer jiggery and salt in the pond to treat skin diseases caused by the ill effects of Mars. The Eastern wing or hallway of the temple is dedicated to Lord Muthukumar swamy; on the southern side is the Juyheshwar Navgraha Temple.

Apart from this, the temple also houses east facing lord Dandayudhapani and South facing deity of Lord Mars. The Lord’s idol depicts four hands-each holding a weapon, the spear, trident, mace and sword. The deity is clothed in red and mounted on a chariot pulled by eight red goats.  People who are inflicted by the ill-effects of planet Mars can offer special prayers to appease the Lord and nullify the negative effects of Mars. There is a special significance of performing puja y offering red flowers on Tuesdays

Note: You can visit Vaideeswaran temple by bus or train. It is on main bus route from Chennai to Kumbakonam via Pondicherry; 25km from Chidambaram.

Honey and sweets are the preferred offerings of Lord Mars; the metal copper and precious gem- Red coral are associated with Mars. The negative effect caused by unfavorable position of Mars can be alleviated by performing special pujas and donations. It can be mitigated by keeping a fast on Tuesdays and offering red vermillion to Lord Hanumanji.